Harc Recipient of $4K in Donations at Carbone’s Prime Event

You are here: Home / Uncategorized / Harc Recipient of $4K in Donations at Carbone’s Prime Event 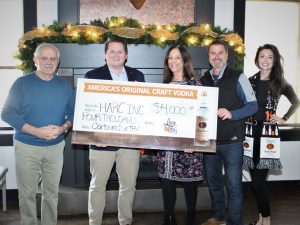 Carbone’s Restaurant reintroduced one of their beloved events after a four-year hiatus on October 21st. Oktoberfest drew over 200 guests to enjoy an evening of cigars, craft beer, gourmet food, and cocktails. The iconic family restaurant chose Harc as the recipient of all donations at the event. Beverage partner, Tito’s Handmade Vodka upped the ante with a match and a total of $4,000 was raised to benefit Harc.

“Having supporters in the community like Carbone’s and Tito’s Vodka willing to include us in their special events is such an honor. These fundraisers not only help us to raise money for our programs, but they also introduce Harc to countless people who may not know about us and the great work we do,” said Greg Calnen, Harc board chair.

Up until 2017, the event took place annually at the Carbone’s location on Franklin Avenue in Hartford. Each time Carbone’s chose a local charity to receive donations from the event’s guests. This year it was held at Carbone’s Prime in Rocky Hill.

“We try to change things up a little by reaching out to the community. Everyone was waiting for us to do this event again, and we definitely want to expand it next year,” said Mary-Beth Corraccio, Managing Partner, Carbone’s.

Getting Tito’s Handmade Vodka involved was an easy sell. According to Frank LaTorra, Rhode Island and Connecticut State Manager of Tito’s. “It’s who we are as an organization. We’re a philanthropic company that sells vodka. We look for worthwhile causes and work with our partners in the community. We have a long history with Carbone’s and the family.”

“Harc is extremely grateful for the generosity expressed by Carbones and Tito’s Vodka. We’re blessed to have supporters like them who help Harc deliver on its mission,” said Najib Habesch, Harc board member.